What Does Wearing the Section XI Singlet Mean to You? 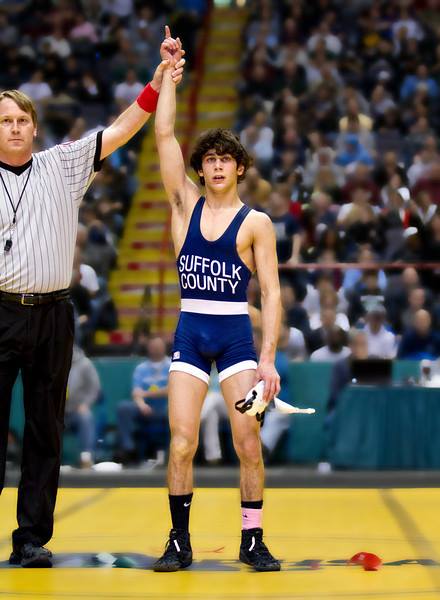 Nick Piccininni – Ward Melville 2015, Oklahoma State 2020
Wearing the Section XI Singlet is one of the best feelings that a High School Wrestler can experience.

Now Instead of having my High School team behind me, I now have all of Section XI behind me.

Brandon Escobar – Rocky Point 3rd NYS, 2012 Olympian
Wearing the Section XI singlet will forever be my highest honor.
It’s my home, my family, friends and my first real accomplishment.
I was young when I earned that singlet and I realized then that anything was possible with hard work.
Suffolk County is a diamond mine of talented wrestlers and great coaches and if you make it out of Suffolk County you are one of the best athletes in the world.
So to be a part of that is an honor on its own.
The Section XI singlet is so special to me that I carry it with me everywhere I go, its been to every competition I’ve ever competed in.
I wore it to the Olympic weigh-ins.
And the best part was that the weigh-in judge looked at my singlet and said “Suffolk County….that’s on Long Island” and I just smiled and said ” “Yeah, Strong Island.”
We are known all over.
Billy Coggins – Rocky Point 2010, Virginia 2015
Competing in the Section XI singlet is the dream of all youth wrestlers in Suffolk county.
When you put on that singlet it gives you a mental edge that cannot be replicated.

It is a chance to cement your legacy and inspire the next generation.

Anthony Volpe – Rocky Point Academy 2010 Rutgers University/UMD
At a very young age, it was a goal to wrestle in the state tournament with that blue & white section XI singlet. It is the pinnacle of being a wrestler in Suffolk County.
That singlet was the reason for every extra work out, weight cut, national tournament, and sacrifices beyond belief. At the end of the day, it was worth every second.
Tyler Grimaldi – Half Hollow Hills West 2013, Harvard 2017
As my dad always said the Section XI singlet is the “holy grail” of New York Wrestling.
Only the best of the best get to compete in it, and it was more than an honor to do so on two occasions.
People hold Section XI to such a high standard.
When you see somebody in the Section XI singlet it automatically demands respect and attention.
Being able to represent Suffolk County at States was one of the many blessings this sport has allowed me.
Vin Miceli – Port Jefferson 2018 Bloomsburg University 2022
Wearing the Section XI singlet is something I’ve strived for since the day I put on a pair of wrestling shoes.
It’s a youth wrestler’s dream.

Wearing the Section XI singlet is like wearing history, I feel like a part of something amazing when I put that singlet on and walk out on the mat.

Once you walk out onto the mat in the Blue and White you feel invincible.

Kris Ketchum – Rocky Point 2019, Ohio State 2023
This singlet made me feel like I was part of something greater.
Like I was on a different level.

The first time wearing it is indescribable.

Nick Munsch – Commack 2017, JWU
Wearing the Section XI singlet for me was a dream of mine since I started the sport of wrestling as a little kid.
There has always been an aura that surrounded any Section XI wrestler at the state tournament.
No one cared about any other singlet except that special navy blue and white singlet.
Anyone wearing that singlet had the potential to walk out of the state tournament a champion because of how tough it was to even make it the tournament from Section XI.
As a kid, it was like seeing the Yankees in their pinstripes.
It became my dream as a little boy to wear that singlet and when it became true it was the proudest moment of my life.
Years and years of blood, sweat, and tears just to wear a singlet for one tournament.
To represent decades and decades of legends before me in that singlet.
Truly a miracle to have been able to wear that singlet and it was only possible because of the hard work and dedication.

For such a long time in my life, I kept visualizing myself being at that state tournament wearing those colors and the fact that it actually happened, in reality, is a feeling that I can’t use words to describe.

Maverick Passaro – ESM 2012
The Section XI singlet was a symbol of family, confidence and belief in yourself.

Once you put that singlet on you were backed up by the greatest section in wrestling.

Wearing a section XI singlet to me was something that I admired since I was a youth wrestler.

Being a young kid, I would idolize the top dogs in Suffolk County that represented Section XI by wearing that singlet.

My brother Christian and I would talk about how our favorite studs from Suffolk County were the most dangerous people on the planet and they were official,  bad-ass men representing Section XI.

Coming from Eastport South Manor, I was able to grow up watching the total stud wrestlers compete who I looked up to.

The Passaro brothers, Busiello’s, Nick Garone and Jimmy Leach were the guys who represented not only ESM but all of Section XI to me being that they were not only beast, but from my town.

My time finally came and I will never forget getting my own Section XI singlet to pack in my bag for the weekend heading to Albany.

Leaving my house that morning for the state tournament, my dad told me,

“This is it kid, you worked for this, now it’s time to represent Strong Island.”

To me, wearing a Section XI singlet was worth more than any designer brand.

Section XI is my pride and wearing that singlet meant everything to me.

Wearing the Section XI meant to me that I had a chance to beat anyone in my bracket.

It meant that I belonged to be in the state tournament.

It meant that I was part of history and at the time I was writing it.