Mark West was an undefeated New York State Champion in his freshman year in high school.

My son Travis was an undefeated New York State Champion in his senior year.

In their respective championship seasons,

Mark and Travis had a combined record of 94-0.

Before high school, as youth wrestlers,

Mark and Travis wrestled each other 14 times.

I believe it was those 14 consecutive losses to Mark as a youth wrestler that galvanized Travis into the wrestler he needed to become to be an undefeated New York State Championship.

I also believe, in a small way, it was Marks 14 consecutive wins over Travis that helped him become an undefeated State Champion as well.

Why do I believe this?

I believe Mark and Travis both benefitted from having the wrestling attitude of Anyone, Anytime, Anywhere.

Whenever Mark and Travis were scheduled to wrestle each other, they wrestled.

No matter when their matchup occurred,

no matter how often they wrestled,

no matter if they previously wrestled each other in the last tournament, or just wrestled yesterday,

or last week, or last month, they always wrestled.

Here is the cycle from which both wrestlers benefitted.

Travis and Mark would wrestle.

Travis and I would review the video and figure out what made Mark win the match. We studied how Mark scored his points and where he may be vulnerable.

We would then go into practice that week with a focus and concentration to learn how to stop Mark’s attack and how to counter his moves.

Travis practiced with a purpose; to clean up the areas where Mark had exposed him.

Soon after, Travis and Mark would wrestle again, with Travis feeling as prepared as ever to compete against Mark because of the work he put in after his last loss to Mark.

Mark would find a new way to beating Travis,

with new moves, and a different attack then the ones we had prepared for.

After the loss, Travis and I would immediately review the video to see how Mark won, dissecting his new attack and coming up with a plan to counter his latest attack.

Once again, we would go into practice that week and diligently work on stopping Mark’s new attack and countering his newly incorporated moves.

Travis and Mark would wrestle again, and once again Travis would go into the match feeling prepared, after eliminating his newfound flaw.

Mark, once again knowing we were going to go back to the video to study him came up with a new way of beating Travis, with new moves and another attack.

This cycle repeated itself for fourteen matches.

When it was all said and done, Travis wrestling Mark 14x wound up being the most valuable thing Travis had done as a youth wrestler.

And I believe it was also one of the most valuable things Mark did as well.

That is the power of Anyone, Anytime, Anywhere.

I give both Mark and Travis a lot of credit.

Never once did Mark say,

No, every time Travis stepped foot on the mat,

Never once did Travis ever say,

“Let’s not go to that tournament. I’m just going to have to wrestle Mark again.”

No, Travis went to the next tournament seeking to wrestle Mark again.

No matter how often, no matter what length of time there was between each match, no matter how mundane it became for Mark to beat Travis, no matter if losing one time to Travis would have been devastating enough to supersede all his wins against him, Mark kept wrestling and kept finding a new way of winning.

The process of this cycle was invaluable to both wrestlers.

It made Travis better as each time he wrestled Mark a new flaw in his game was found, which he then went back and corrected.

After 14 cycles, Travis was nearly flawless.

I also believe the cycle made Mark a better wrestler as he learned 14 ways to beat a quality wrestler, never relying on only one way to win.

I tell this story because I believe there is great value in it.

So often, nowadays you see guys who are afraid to face the same wrestler multiple times for fear that the other wrestler might “figure them out.”

Shame on them if they can be “figured out” so easily.

In fourteen matches, Mark couldn’t be “figured out” because he did the work to stay one step ahead.

He trained to find a new way to win.

I have seen elite wrestlers forfeit a semi-final match in a major tournament during the regular season so that they wouldn’t face their expected postseason rival anywhere other than in the state final.

Shame on him to think he could only beat his opponent one time.

So often, nowadays you see guys who won’t wrestle the same opponent in a short period of time, because their flawed thinking is, “I can only beat him once, and I’d rather save that win for the right time.”

So often nowadays you see guys relying on the same moves to win, never expanding their repertoire; thus, it is only a matter of time before their opponents were able to figure them out.

So often nowadays wrestlers are afraid to lose to someone they have beaten multiple times as they fear that the one-loss would loom larger than all their combined wins against that same opponent.

When one allows fear to steer a crash is imminent.

So often nowadays wrestlers try to pick and choose the spots where they perform to preserve an artificial ranking of being ranked #1 instead of wrestling the best competition available and becoming better in the process.

I believe by wrestling Anyone, Anytime, Anywhere, allows you to reach an unbridled level of excellence.

Is a chapter from

Which can be purchased at 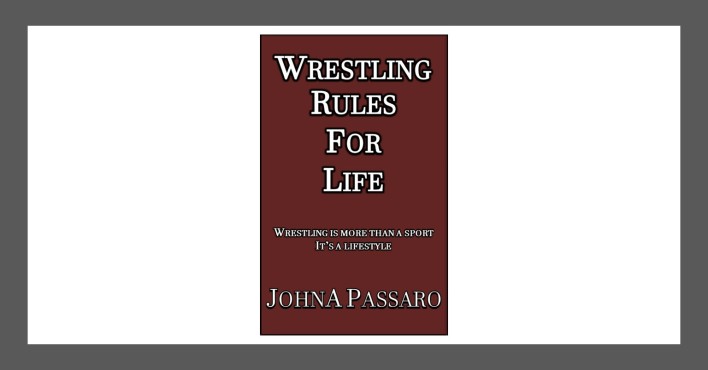