There is a book that I have read and re-read many times titled “Bird by Bird,” by Anne Lamott.

Every time I re-read it I am moved by something that I didn’t see before.

Reading it once again before attending this year’s State Tournament, this passage jumped off of the page and resonated with me:

The Gulf Stream will flow through a straw provided the straw is aligned to the Gulf Stream, and not at cross purposes with it.

I’ve been to the NYS Wrestling Tournament many times in my life.

It is an event I look forward to attending every year.

Every time I attend the event I am moved by something I hadn’t seen before.

In 1983, I attended the NY State Tournament as a dejected non-qualifying wrestler, looking in from the outside. A road trip that I remember to this day, with half of my teammates jammed in a car listening to Journey’s “Don’t Stop Believing,” over and over.

In 1990, I attended the tournament after convincing my 9-month pregnant wife that it would be fun to travel 8 hours each way to Syracuse to watch the state finals.

From 2008-2011, I attended the NY State Tournament as a father of two aspiring sons who longed to wrestle in the tournament one day.

Last year, I attended as a fan.

This year, I attended as the father of two coaches who had wrestlers competing in the tournament.

This year I viewed the tournament from the perspective of the importance of a good coach in a wrestler’s life.

I always get to the tournament a day early.

I love to watch the wrestler’s in the pre-tournament workout at the Times Union Center.

I just love being around the aura.

This year was no different.

As I was hung over the boards talking with Coach Bass from Westhampton, a coach whom I have become real close with over the last few years, a wrestler approached us and said:

“Coach, I did everything that you wanted me to do, what should I do now?”

It was Dan McClure.

He was polite, respectful and clear-eyed.

He was asking his coach – Coach Bass, for direction.

There are times in your life when words stand out, as if they come out of someone’s mouth in italics for emphasis, for you to remember.

When I heard McClure ask for direction from his coach I couldn’t stop to think how fitting his words were.

After asking his coach for direction, McClure was attentive, eager for his coach’s answer.

He would have done anything his coach asked of him.

By doing everything his coach asked of him was exactly why he was standing on the floor of the New York State Tournament, warming up.

I first learned of Dan McClure’s story earlier in the year when Coach Bass humbly shared with me that he had an under the radar wrestler I should keep an eye on as he felt that he could do some damage in the county tournament, even win it.

He then went on to tell me Dan McClure’s story and his transformation over the last two years.

How, for most of his life, Dan McClure was a self-proclaimed “knucklehead”, a bad student, a kid who was getting thrown out of everything, a kid that could have gone either way. 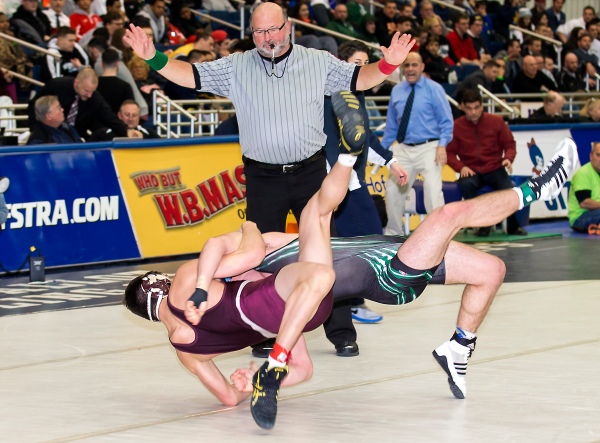 And then two years ago, with zero varsity wins under his belt, McClure approached Coach Bass and told him that he wanted to be a county champ.

As would be the case with most veteran coaches, Coach Bass’s initial reaction was laughter, as he understood what it took to become a county champion.

Then he went to work.

He devised a list of 5 things McClure needed to change in his life to become a County Champion.

4 of them had nothing to do with wrestling.

Become a better person, a better student, get your life in order…

Only 1 item on the list had anything to do with wrestling.

Coach Bass did what all great coaches in this sport do; he used wrestling to provide a platform for McClure to get his life in order.

In essence Coach Bass realigned McClure’s internal compass to be for pointing towards success in life.

Bass convinced McClure that to become a county champion that he first had to get his life in order.

And to his credit, McClure did.

As soon as he accepted Coach Bass’s list, wrestling provided McClure with stability, with direction, as pursuing a County Championship became the navigation tool Coach Bass used to guide McClure into manhood.

Fast forward two years and McClure is standing on the floor of the New York State Tournament as a County Champion asking his coach for more direction, more guidance.

“You’ve done everything you needed to do son. You’re ready.”

The sport of wrestling is about preparing young athletes for life, for manhood.

They use wrestling as a gyroscope, a navigational tool to align young men with the gulf stream of life.

Because they know the river of life will flow through them if they are not at cross-purposes with it.

This is the true essence of the sport.

That is what this sport is about.

No, Dan McClure didn’t step on the podium in the NY State Tournament this year.

He got something more.

He got his straw aligned with the gulf stream of life.

And that is the real prize.

And for the last 37 years, Coach Bass has been preparing young men for the world “Bird by Bird.”